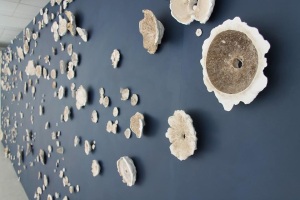 Initially I was uneasy with the idea (or my perceived notion) of an art piece created off site to be ‘tried out’ in the capel, that the capel may provide merely a convenient large enough physical space for the physical demands of a work.

Having been enthralled and deeply moved by Siriol Joyner’s process during her visit in the summer; a sincere intention and excitement to ‘become’ with the capel, I had decided to invite artists in the future that will involve the capel space as integral to their practice development. I was concerned that the capel was some how now going to be disrespected; a very temporary ‘deposit’ on the floor, undertaken merely with the intention to check the logistics in terms of a further potential established exhibition space…

I WAS SO WRONG, and I apologise to you Louise! It was immediately apparent  that Louise and Alice Forward (Artist and partner…part of Short&Forward ) had an innate respect and care for the Capel space, both in its physical presence and social context, and were excited about, and thoughtful regarding how the work and they would, converse with both. I was so pleased that Louise and Alice accepted my offer to help them lay over four hundred beautifully casted mushroom pieces on the Capel floor. I immediately felt that I wanted to help and be involved.

I had intended to ask Louise to explain more about this work and her wider practice..take notes, as I was genuinely excited about it, however, as the experience unfolded it somehow seemed inappropriate to probe, but rather to let thoughts and conversations  ’emerge’… ‘pop up’ fungi like, in the process. Quietly unwrapping the mushrooms and laying them intuitively with care on the floor; feeling the hands/mushroom casts/wooden floor relationship, with an awareness of the pulpit, the light flooding in from the high windows and past experiences in the capel , gentle and wondrous discussions arose about fungi, bees ( a subject that Alice is passionate about within her art practice), capel acoustics and more…

For me, what became a shared reverent repetitive action of unwrapping, touching, laying, moving the mushroom casts, lifting and re wrapping them opened a space to quietly re consider notions of ecological relationship. The particularly wondrous conversation ‘Making Art About Centipedes’ between Suzi Gablik and Christopher Manes, from Gablik’s book ‘Conversations before the end of time’ came to mind, in which they discuss and challenge the perceived evolutionary hierarchy between humans and fungi. ( I now know that this conversation between Gablik and Manes, amongst other conversations within the book, is one that Louise is also particularly fond of. )

I was touched by Louise’s thoughtful and sensitive decision that the work ‘had somehow found its resting place’ and in order for the work to be shown elsewhere, she would have to discover other ways of showing it. For me, it was poignant that Louise considered the work and the capel as one..a becoming of the two that could not be replicated.

What a wondrous Capel day!.. great to meet two exciting artists, that have become dear friends. I also rather like being described as a ‘rare and wonderful sub species’.. of the art world…I think?..yes…thank you Louise.

Louise Short is a critical thinker…a deep and unusual thinker, and I feel privilaged to share time thinking with her. It is ‘sharing’ I always now look forward to.

I have recently been to Louise Short’s latest exhibition, Mycophilia, at The Old Chemist, now part of Ceredigion Museum, Aberystwyth…it is wondrous and intelligent of course…and yes she has found a new way to show the mushrooms! (see the above image)