The last of six recordings made in Capel y Graig on Saturday the 18th Feb 2012.
All of them can be heared here.

This experiment uses a recording process developed by Alvin Lucier. The process, through a sequence of recording, playing back the recording and re-recording the playback, layers the resonant frequencies of the space. In the final recording, the acoustics of the chapel have become a determining compositional factor, affecting all the sounds of the performed music, rendering some audible, some inaudible, and creating new, rich and varied sounds from those performed.

Unlike Lucier, in whose work I am sitting in a room only the first recording documents a performance, I set out to record a new voice part with each re-recording, making six recordings for the six-part arrangement. Musically, this was challenging, as the recorded voice and piano became increasingly hard to follow, a wash of sound.

As an artist/composer, I am interested to explore how chance operations, can become compositional devices, and function as ways to re-experience traditional compositional structures. In this work, attentional dynamics and acoustics are the chance operations which work upon the performance and recording of a harmony song accompanied by piano.

As a performer, I am interested in meditation and action and the attempt; in the particular qualities of attention generated by practising impossible tasks; and in the implications that these have for performance and how we understand performance. In untitled: Holy Hiatus, an annual 6 hour performance which also utilises Lucier’s process, I attempt to sing with the recording of my performance the previous year (this of course being an attempt to sing with the recording of the year before that): my rule is to sing only if can catch the very moment that I begin to sing on the recording, like a surfer catching a wave. Previously, I have performed a duet with a record of Mair Evans singing Mi Glywaf Dyner Lais while her voice was gradually lost in a wave of sound coming from many other looped records played simultaneously by Jacob Whittaker.

The music is based on Consider the Lilies by Robert Topliff. Topliff (1793 – 1868), a composer, arranger and editor, was also blind. He was a professional musician all his life, and organist of Holy Trinity, Southwark, London. I took phrases and fragments of his song for solo voice and piano and from them created a repetitive rhythmic song for six voices and a piano. The brief was to work with Consider the Lilies, the text relating to the theme of ‘skin’; and to create a work in six parts, so that one recording could be released each day.

After visiting the Tannery (and with me now wearing The Coat) we arrived at Capel Y Graig with less time than we hoped. Setting up the PA, mics and recording devices always takes longer than I anticipate…we only had time for one take! 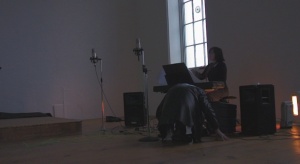